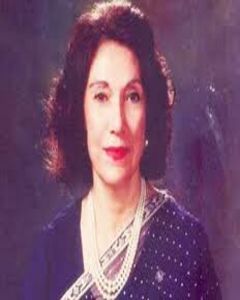 Career : Nusrat Bhutto was an Iranian-Pakistani who was the wife of the 9th Prime Minister of Pakistan Zulfikar Ali Bhutto, serving as the First Lady of Pakistan during his premiership from 1971 until Bhutto’s removal in 1977. She became her husband’s successor as the chairman of the Pakistan Peoples Party (PPP) from 1979 to 1983. She was also the mother of the first and only female Pakistan Prime Minister, Benazir Bhutto.She died on 23 October 2011 in Dubai due to the effects of Alzheimer’s disease.