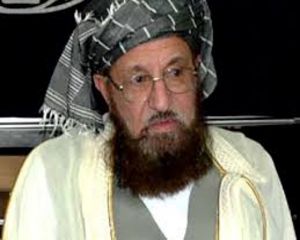 Career : Maulana Sami ul Haq is a Pakistani religious scholar and a politician. He is regarded as the “Father of the Taliban”and has close ties to Taliban leader Mullah Mohammed Omar.Sami ul Haq is currently the chancellor of Darul Uloom Haqqania, a Deobandi Islamic seminary which is the alma mater of many prominent Taliban members. Haq serves as chairman of the Difa-e-Pakistan Council and is the leader of his own faction of the Jamiat Ulema-e-Islam political party, known as JUI-S.Sami ul-Haq is also a founding member of Muttahida Majlis-e-Amal the creator of Harkat-ul-Mujahideen, a religious organisation.He has also served as a member of the Senate of Pakistan.He formed Mutahida Deeni Mahaz (United Religious Front), an alliance of relatively small religio-political parties, to participate in Pakistani general election, 2013