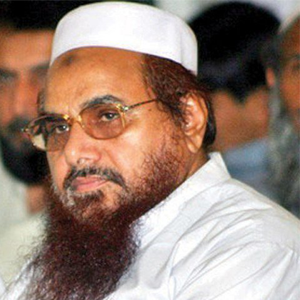 Career : Hafiz Muhammad Saeed is the amir of Jama’at-ud-Da’wah,which operates mainly from Pakistan and has had sanctions placed against it as a terrorist organisation by the United Nations.The organisation is banned as a terrorist organisation by India, the United States,[3] the United Kingdom,the European Union, Russia and Australia.India considers him one of its most wanted terrorists because of his alleged ties with Lashkar-e-Taiba and its involvement in attacks against India,and Saeed is listed on the NIA Most Wanted list. The United Nations declared Jama’at-ud-Da’wah a terrorist organisation in December 2008 and Hafiz Saeed a terrorist as its leader.In April 2012, the United States announced a bounty of $10 million on Hafiz Saeed, for his alleged role in the 2008 Mumbai terror attacks.Since 2008, various Indian politicians have demanded that Saeed be handed over but there is no extradition treaty between the two countries.Hafiz Saeed pleaded innocence and claimed that he has no links with LeT and that India has no evidence and no real proof behind their allegations.Pakistani officials said that Saeed was helping in identification and rehabilitation of former militants.Currently, he lives in Lahore, Pakistan in a “fortified house, office and mosque” that is guarded by Pakistani police and his supporters.He gives interviews to Western media, including the New York Times newspaper