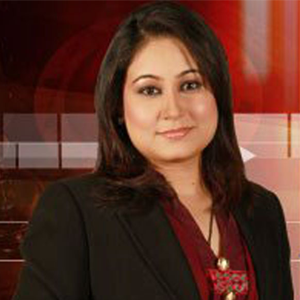 Career : Asma Chaudhry is a Pakistani female journalist and anchor.She was anchor on the Dawn News’s program Target Point. On April 7, 2012 Chaudhry joined Dawn News as Deputy Editor Research and Analysis and Senior Anchor.Chaudhry started her career as Sub Editor in Jang Group of News papers, Asma soon got associated with the state television and worked there as a producer. She was the recipient of PTV Award for program Vision Pakistan in 2003. Later she worked with the top rated channels of Pakistan as a producer and then anchored Program Parliament Cafeteria from parliament with prominent political personalities of Pakistan. As special diplomatic correspondent she covered the AGRA summit, SAARC summit, us presidential elections 2008 and also visited for special assignments in USA, UK, India, Germany, Sri Lanka, Afghanistan, Bangladesh. Chaudhry has also participated in IVL program by state department USA on Documentary Productions and Film Making.Recently she has joined channel 24 and is hosting her talk show ‘News Point’.