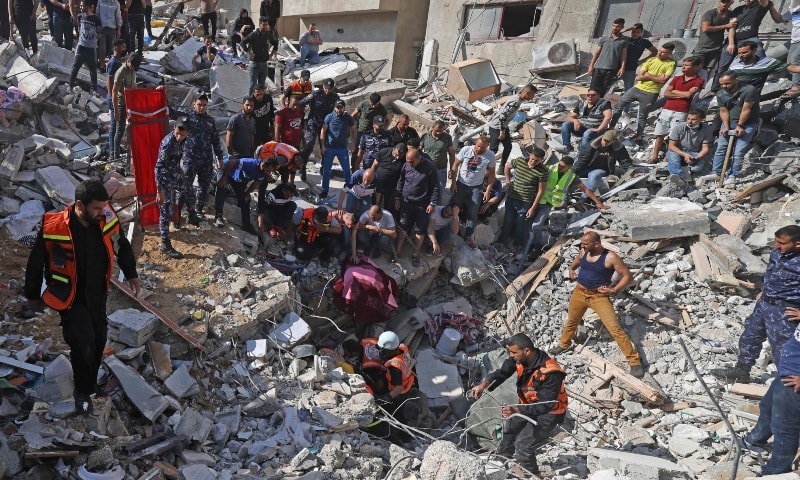 Palestinian paramedics search for survivors under the rubble of a destroyed building in Gaza City on May 16, 2021, following massive Israeli bombardment of the Hamas-controlled enclave. — AFP

Israel bombed the home of Hamas's chief in Gaza early on Sunday and sirens warning of rocket attacks sounded in Israeli border towns shortly after dawn as hostilities stretched into a seventh day with no sign of abating.

At least 153 people have been killed in Gaza since Monday, including 42 children, health officials said. Israel has reported 10 dead, including two children.

The United Nations Security Council was due to meet later on Sunday to discuss the worst outbreak of Israeli-Palestinian violence in years.

UN Secretary-General Antonio Guterres reminded all sides “that any indiscriminate targeting of civilian and media structures violates international law and must be avoided at all costs”, UN spokesman Stephane Dujarric said in a statement on Saturday.

Both Israel and Hamas, the Islamist group that runs the enclave, insisted they would continue their cross-border fire after Israel destroyed a 12-storey building in Gaza City that housed the US Associated Press and Qatar-based Al Jazeera media operations.

The Israel military said the al-Jala building was a legitimate military target, containing Hamas military offices, and that it had given advance warnings to civilians to get out of the building.

The AP condemned the attack, and asked Israel to put forward evidence. “We have had no indication Hamas was in the building or active in the building,” it said in a statement.

In what Hamas called a reprisal for Israel's destruction of the al-Jala building, Hamas fired 120 rockets overnight, the Israeli military said, with many intercepted and around a dozen falling short and landing in Gaza.

Israelis dashed for bomb shelters as sirens warning of incoming rocket fire blared in Tel Aviv and the southern city of Beersheba. Around 10 people were injured while running for shelters, medics said.

In a burst of air strikes early on Sunday, the Israeli military said it struck the home of Yehya Al-Sinwar in the southern Gaza city of Khan Younis. Sinwar, who was released from an Israeli prison in 2011, heads the political and military wings of Hamas in Gaza.

Another air strike killed a Gaza neurologist and wounded his wife and daughter, Palestinian medics and relatives said.