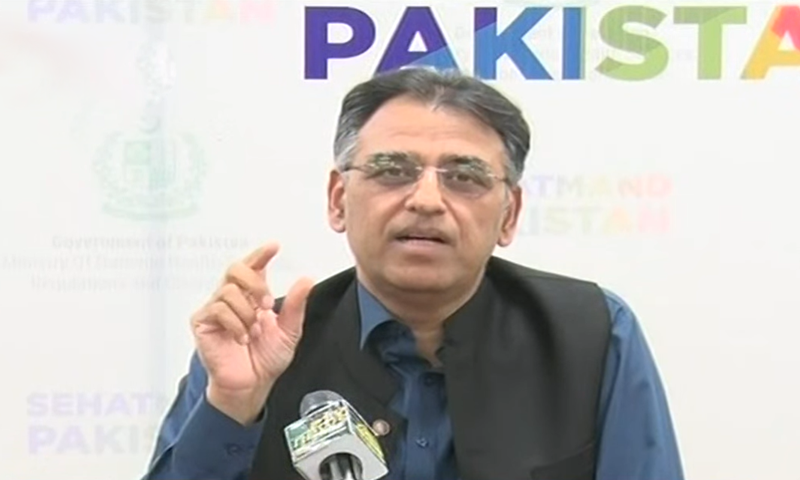 Minister for Planning, Development and Special Initiatives Asad Umar has said that the government plans to open registration for Covid-19 vaccination for all citizens after Eid.
He said this while speaking to select senior journalists on Thursday.
The announcement comes a day after over 100 deaths were reported for the second consecutive day on Wednesday, taking the overall tally to 15,000 mortalities.
Umar termed the next five to six weeks "critical" for the ongoing third wave of the virus in Pakistan.
He said so far 14,000 people had received vaccination through the private sector, while 1.1 million were inoculated as part of the government campaign.
The minister said China was Pakistan's "primary source" for vaccination for now, adding that the Cansino Covid-19 vaccine will also be available in the country after Eid.
"We will be able to vaccinate more than 125,000 people per day after Eid," Umar told media representatives.
He noted with concern that the current number of critical care patients in the country was higher than during the first coronavirus wave.
"Strict enforcement of SOPs (standard operating procedures) can bring down the rising rate of infection," he stressed.
Pakistan reported 5,329 coronavirus cases and 98 deaths during the last 24 hours. This is the highest number of daily Covid-19 infections so far this year as well as the highest since June 16, 2020, when 5,090 cases were reported.
The current positivity rate is 10.7 per cent.
Among the four provinces, Punjab recorded the highest number of daily infections at 2,990, along with 62 deaths. It was followed by Khyber Pakhtunkhwa which registered 1,018 cases and 23 deaths.
Earlier this week, the National Command and Operation Centre (NCOC) said it has decided to administer Covid-19 vaccines to citizens aged 80 years and above in their homes.
Source Dawn News
You must log in or register to reply here.
Share:
Facebook Twitter Reddit Pinterest Tumblr WhatsApp Email Link